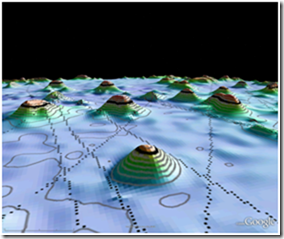 One of the mysteries of the sea are the large number of seamounts that rise up on the seabed and, in a few cases, break surface to form oceanic islands. Volcanic in origin, seamounts are widely scattered throughout the world’s ocean basins, especially in the Pacific. Recent estimates suggest that there maybe as many as 200,000 seamounts with heights that range from 0.1 to 6.7 km above the surrounding seafloor. Seamounts are generally circular in shape, have pointed, star-shaped, curved, or flat tops, and are often capped by a coral reef. They are of geological interest because they record the motions of Earth’s tectonic plates and the magmatic ‘pulse’ of its deep interior. They are also significant as ocean ‘stirring rods’, biodiversity ‘hotspots’, and hazards for megathrust earthquakes, submarine landslides, and navigation. Statistical studies suggest that there are as many as 24,000 seamounts higher than 1 km still to be discovered. The charting of these seamounts and the determination of their morphology, structure, and evolution is one of the many challenges facing marine geologists in the future.